"Like a thief in the night." — Therion, upon selecting him.

Therion is one of eight playable characters in Octopath Traveler. He is a master thief known throughout the realm thanks to his multiple exploits in stealing. It is mentioned that almost no one knows of Therion's face despite his infamy, and that he is the enemy of every wealthy home and person.

Therion has white, shaggy hair that reaches the nape of his neck and has a fringe covering a part of his face, has green eyes and darker skin. He wears a purple scarf, a thick shawl that has a lighter shade than his neckwear, a white short-sleeved undershirt, dark pants and leather shoes. After his endeavor in the Ravus Manor, a metal bracelet called the fool's bangle is secured around his right wrist with a chain attached to it.

Therion is cocky and cynical, as made evident through his interactions with other characters. He remarks that a guard has a stronger bark than bite, and refuses to settle in a partnership with two other thieves as he believes them to be unnecessary. Therion is quite sarcastic as well, and has a dry sense of humor.

Although he is a talented thief and has a sharp wit to boot, Therion is still likely to fail in his endeavors due to how short-sighted he can be, as mentioned by Heathcote. He seems to acknowledge his own faults, however, as he immediately says how he 'should have seen this coming' after falling into the trap of the Ravus Manor.

Therion is also known for being a lone wolf, working better by himself and always rejecting potential offers to work with other people. It is later revealed that he has trust issues, born from being cruelly betrayed at a younger age.

Later on in the game, after meeting Darius again, he is called a "sentimental fool" due to how he has learned to put trust in people again, showing his character growth after meeting Cordelia and the other travellers.

"Your name is Therion, and you are a thief. While your past is a guarded secret, your exploits are known far and wide. Mere whispers of your extravagant heists strike fear into the hearts of the wealthy. Drifting into the Cliftlands one day, you hear a rumor of great riches to be had. You set your sights on a mansion said to be impregnable, only to find what you never expected..." —Therion's description when selecting him.

Ten years prior to the events of Octopath Traveler, Therion was captured and sent to prison for an unspecified reason. He meets Darius, and thanks to Therion's smart thinking, they break out and start a life as thieves on the run. The moment Darius saw Therion's thieving talent, he planned to use him to reach his goal of being at the top of the world. That was the only reason Darius kept Therion around.

4 years later, Darius was approached by the Cianno group and offered a place in their ranks if he disposed of Therion. He gladly agreed to this, and after sharing the truth with Therion, pushed him off a cliff. Therion miraculously survived the fall, staying in Bolderfall and continuing to hone his skills until he gained the title of being a master thief.

After hearing rumors in the tavern of a great treasure that lies in Ravus Manor, Therion breaks in and discovers it is heavily protected by guards, dogs, and traps. He enters the manor by stealing an invitation from a merchant and reaches the so-called treasure, a blue gemstone. He is then confronted by Heathcote, a butler of the manor. As Therion attempts to escape, the two engage in battle, with Therion emerging victorious.

During the battle, Heathcote slips a Fool's Bangle, a mark of shame, on Therion's wrist. Cordelia Ravus, the proprietor of the manor, explains that her family's treasures, the four Dragonstones, had been stolen. The Fool's Bangle would only be removed if Therion stole them back, and he reluctantly agrees to this negotiation.

Therion follows the first lead to Noblecourt. At the tavern, he learns that the ruby Dragonstone is being researched at Orlick's Manse and that a man named Barham may know of its whereabouts. Barham reveals that he and Orlick were once friends, but parted ways after Orlick began obsessively researching the stone.

Barham has Therion steal the ingredients to craft a key to the lab and discloses him the password. With these materials, Therion successfully infiltrates Orlick's Manse and defeats Orlick, stealing back the ruby Dragonstone.

Darius has made Gareth his new right-hand man, who offers to battle Therion as Darius escapes. Therion defeats Gareth, but returns to Ravus Manor empty-handed, as Darius now possesses both the gold and emerald Dragonstones.

Therion arrives in Northreach, a city Darius's band of thieves has made their playground. Darius has placed wanted posters of Therion across town to send several of his men after him, but Heathcote arrives in time to help. Therion learns that Heathcote is a former thief.

Therion infiltrates the thieves' base, the Lorn Cathedral, by stealing the uniform of a seasoned thief. He confronts Darius and defeats him in battle, taking back the remaining Dragonstones. Darius is later betrayed and killed by his own men.

Upon Therion's return of the Dragonstones to Ravus Manor, Heathcote explains that the stones were used to unlock the Gate of Finis. Therion finally removes the Fool's Bangle and bids Cordelia and Heathcote farewell.

As Therion's previous affiliate, Darius was the only one that Therion agreed to refer to as his 'partner-in-crime.' They were seemingly close during their younger years, but in their adolescence, tensions started to bring them apart. Therion began to doubt the actions of his partner, and Darius did not take kindly to this.

Darius is the root of Therion's severe trust issues. He continuously taught Therion not to trust anyone, then betrayed Therion himself by attempting to murder him. When they reunite in Wellspring, Darius continues to treat Therion contemptuously and threatens anyone who attempts to pry on their history.

The only reason why Therion is affiliated with Cordelia Ravus is due to his agreement to procure the Dragonstones in exchange for having the Fool's Bangle removed. At first, Therion believes her to be nothing more than a sheltered princess, but she reveals that, like him, she understood the pain of betrayal.

Despite being betrayed at a young age, Cordelia held on to trust thanks to Heathcote. With her help, Therion is able to rebuild the trust in others that Darius had shattered.

Therion is a Thief, equipped with daggers and swords in battle. In line with his profession, Therion boasts debuffs, HP- and SP-draining skills, and the quintessential Steal. He has the highest evasion stat of the eight protagonists, and the second-highest speed after Primrose. He has high survivability in combat, as HP Thief and Steal SP deal good damage, and return healthy amounts of HP and SP to him, and Shackle Foe is a strong debuff that reduces an enemy's physical attack damage. However, Therion suffers from a small SP stat. This can be mitigated with Steal SP and fixed with accessories, but he would benefit most from equipment that capitalizes on his speed and evasion. Speed is of particular importance to him because it powers up his divine skill, Aeber's Reckoning. Wielding two weapons in battle along with being able to use fire magic gives Therion the edge and versatility he needs in exploiting the weaknesses of foes early on, especially as swords are a very common weakness in the early game.

His unique Talent, Pick Lock, allows him to open purple treasure chests. The player cannot open these chests without Therion in the party, and they typically contain valuable items or gear.

Below are the sprites and appearance changes for Therion with each basic Subjob:

"So I'm going into the mansion. ...Yeah? What is it? You want to pair up with me on this? You sure you're feeling alright? ... Hmph. The mark's House Ravus. Just keep quiet and try not to get in my way, okay?" —Joined the Party

"(Damn it, this one's not as dumb as they look.)" —Unsuccessful Steal

"And that's that." —After battle

"Where's the nearest tavern?" —After battle

Artwork of Therion and Alfyn for Octopath Traveler: The Four Paths of Eight Travelers.

Artwork for Therion when finishing Chapter 4.

Artwork of Therion by an anonymous designer. 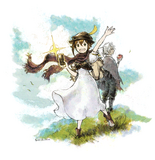 Promotional artwork for Octopath Traveler: Champions of the Continent.

Concept art of Therion and Alfyn.

Therion is a Greek word for a 'beast' or a 'wild animal'. It may also refer to a god in Thelema who is the consort and male counterpart of Babalon who often referred to himself as the Beast 666 or Master Therion.