Edit
watch 02:46
The Quarry - The Loop
Do you like this video?
Play Sound

"Oh, the tragedy! It moves me to the depths of my soul!" —Simeon, revealing his true colors

Simeon is a character in Octopath Traveler. He is a poet and playwright who is known for his dramas and tragedies, but is also secretly the leader of the criminal organization known as the Obsidians, and orchestrated the murder of Geoffrey Azelhart. As such, he is the main antagonist and final boss of Primrose's story.

Simeon has long silver hair tied in a braid and wears a coat and black cape. The mark of the crow is on his neck, which he conceals with a cravat.

Simeon initially appears to be a considerate gentleman that Primrose has had affection for since childhood, but is later revealed to be a cunning sociopath who uses his charisma as a façade to mask his true personality: an extremely sadistic man who enjoys using other humans as his playthings, claiming to derive pleasure from watching their lives fall apart. He adores art and theatre for this reason, is a passionate poet and playwright himself with a specialty in writing tragedies, and even went as far as to refurbish the castle of his former kingdom into a massive amphitheatre. He seems to enjoy the challenge of psychologically breaking those with strong wills, one reason for his unhealthy obsession with Primrose.

Simeon has an eloquent manner of speaking, which he retains even after his true colors are revealed. However, during Primrose's final confrontation with him, Simeon's polite façade eventually collapses completely in his sheer joy in psychologically tormenting her, questioning her motives and attempting to pressure her to resign herself to a life of loneliness and despair, sounding increasingly melodramatic as he does so.

126 years prior to the events of Octopath Traveler, the Ventus Dynasty, a kingdom in Everhold in the Highlands, fell into civil war after the death of Ventus the Third's son. The younger brother, son of the queen, battled for the throne with his older half-brother, the bastard son of the king's mistress. Simeon, the younger brother, emerged victorious, but he would later go missing that same year. Simeon received the blessing of no aging and the Thief's Ring from Lyblac.

Simeon would meet Mattias 11 years later (115 years prior to Octopath Traveler), a former priest who had lost his faith after his loved ones perished in a fire started by a lightning-strike, despite his prayers for the gods to save them. Mattias had also met Lyblac and was bestowed with the power of no aging from her. Together, he and Simeon co-established the criminal organization known as the Obsidians, of which Simeon became the leader.

11 years prior to the events of Octopath Traveler, Simeon was employed as a gardener for the Azelhart family in Noblecourt, where he met Primrose. Primrose grew attached to Simeon, often wishing to spend time with him and listen to his poems. Unbeknownst to Primrose however, Simeon was secretly the leader of the Obsidians.

A year later, alongside his men Albus and Rufus, Simeon murders Primrose's father Geoffrey Azelhart for possessing knowledge about the Gate of Finis.

At some point, he met Arguste, a fellow playwright and became pretty close to him. For unknown reasons, he gave him the Thief's Ring.

Ten years later, he returns to Noblecourt in order to meet Primrose, expressing his delight that she has become such a beautiful young woman. However, following Albus' death at the hands of Primrose and her comrades, Simeon appears in the room after Revello walks out, supposedly by a secret entrance. He stabs Primrose and delivers the truth to her, revealing his role in her father's death as "the head of the Crows" before leaving her to die.

Simeon returns to Everhold and prepares a play that is a mockery of Primrose's life down to the last detail, as an attempt to distract her from exacting her vengeance. When she confronts him on the balcony, he pressures her further and attempts to convince her that vengeance would not make her father proud. Primrose overcomes his words and exacts her revenge, recognizing that his words are spoken out of a desire to gain a psychological advantage over her rather than any concern for her well-being. Simeon, in his mad quest for drama, sees this as a perfect end to her story, seeing it as a beautiful tragedy, and welcomes Primrose's dagger into his heart.

During the first phase of his boss battle, Simeon will fight alongside a Father Marionette and a Dancer Marionette. If Simeon is defeated before the marionettes, the boss battle will end.

Simeon will begin battle with 3 shields, but will increase them by 2 after recovering from a break, up to a maximum of 7 shields. He occasionally will not act during his turn.

When a marionette drops below 50% health, Simeon will activate an aura that powers up its moves and increases its actions per turn to 2. This effect can be applied to both marionettes and cannot be removed.

Father Marionette will uses the following abilities once the effects of Simeon's Come, my shadowy friends! has been applied:

Dancer Marionette will uses the following abilities once the effects of Simeon's Come, my shadowy friends! has been applied:

The Gate of Finis

Simeon will fight alone during the second phase of his boss battle. At 50% health, he will increase his actions per turn to 3.

Simeon will begin with all but one weakness locked. After each break, he will unlock another weakness, with Dark (the only weakness present in all sets of weaknesses) being the last weakness to unlock.

During the latter half of the battle, Simeon will use Future Denied, which conceals the party's turn order for the rest of battle. Simeon's actions will still be visible, and the amount of actions each party member receives is unaffected.

Simeon is able to inflict silence on the entire party. It is recommended to bring an Apothecary and equip at least one party member with an Articulate Stone.

"Well...shall we dance?" —Before using Serenade to the Darkness

"Come, my shadowy friends!" —Powering up a marionette

"Give yourself to the darkness!" —Increasing turn actions

"Quiet down! I'm trying to enjoy the show..." —Before using Master of Silence

Simeon as he appears in The Gate of Finis.

Concept art of Simeon during Phase 1. 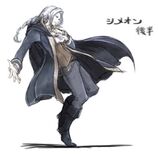 Concept art of Simeon during Phase 2.