Start a Wiki
watch 02:13
'Octopath Traveler' Beginner's Guide: Primrose Azelhart
Do you like this video?

"May I have this dance?"

— Primrose, before a random battle.

Primrose Azelhart is one of eight playable characters in Octopath Traveler. She was only one of the two playable characters in the Project Octopath Traveler Demo. Primrose was a member of the once proud House Azelhart, until one fateful night changed her life for the worse. Now, she takes the front of a dancer in Sunshade as a means to try and track down the men who instigated the murder against her father.

Primrose has long, brown hair that goes past her waist and is tied up into a high ponytail. She possesses a slim build, has pale skin, and wears makeup, either for personal reasons or for the sake of her profession. She is adorned with jewelry such as golden loop earrings, bracelets, and a necklace that was possibly given to her by Helgenish, her former employer. As a dancer that works in an establishment meant for the pleasure of the watchers, Primrose predominantly wears a red dancer outfit consisting of a short top and a high slit skirt that leaves much of her bare skin showing. On her feet are brown sandals.

With the death of her father, the loss of her home, and the persistent disgrace Helgenish brought upon her while she worked at Sunshade, Primrose was forced to mature quickly after her father was murdered. She takes it upon herself to enact revenge on the people who took his life. The only thing on her mind is vengeance, and she is willing to endure anything just to get leads on the men that ruined her life—from the jeers of the other dancers, the cat-calling of her customers, and the abuse and the dishonor Helgenish gives her on a daily basis.

Yusufa had described Primrose as a woman of few words, one that never discloses anything about herself. She acts aloof and distant from other people by locking up her true desires and feelings, for the sake of keeping up the act that pleased her previous master. However, Yusufa finds her likable either way. Primrose is also mentioned to be courageous and righteous, always standing up for Yusufa when no one else did. She was even was bold enough to anger Helgenish by nearly escaping the tavern in pursuit of the man who bore the mark of the crow on his left arm.

Primrose is also noted to be a good actor. She would constantly put up the facade of an ignorant and obedient woman, when in truth she despised every moment she spent under the watchful eye of her employer. Above all else, she is cunning and ruthless for the sake of searching for the men that killed her father but still has a kind enough heart to put the well-being of others before her own.

"Your name is Primrose, and you are a dancer. You ply your trade in the pleasure district of the town of Sunshade, shrouded forever in darkness. But in truth, you are a highborn daughter of the once-proud House Azelhart, an identity you conceal from all. "Three men bearing the mark of the crow. They took my father from me." But you will have your revenge."

— Primrose's description when selecting her.

Prior to Story Edit

Ten years ago, Primrose witnessed three men break into her home and murder her father. All three had the mark of the crow somewhere on his body: one had it on his left arm, the other on his right, and the last one had it on his neck. As she was young, Primrose simply cowered in fear as she watched the events transpire. She left home and began traveling from place to place to find leads on where the men might be so she could have her revenge.

Two years later, her information gathering led her to the town of Sunshade, where she was taken in by Helgenish and fashioned into a dancer. She endured his abuse, all for the sake of finding one of the men who murdered her father. At the start of Octopath Traveler, she is still seen dancing for Helgenish and persevering through his manipulative tendencies towards his dancers.

While enduring another night of work under Helgenish, Primrose finally spots a man with the mark of the crow on his left arm at the tavern. She attempts to pursue him but is stopped by Helgenish. Her friend Yusufa offers to distract their employer while Primrose goes after him.

Following the man, she spots him handing a map to Helgenish. She follows him deeper into the Sunshade Catacombs, but as she exits she is greeted by Helgenish, who has captured Yusufa. After Helgenish murders Yusufa, Primrose engages him in battle, slitting his throat. Taking the map for herself, she sets off for Stillsnow in pursue of the left-hand man.

At Stillsnow, Primrose reunites with Arianna, who used to work for House Azelhart. Arianna reveals that after House Azelhart fell, she began working at a prostitution ring owned by the left-hand man. Primrose is able to convince Oren, the stagecoach, to take them to the Obsidian Parlor.

There, she confronts Rufus and exacts her revenge on him. He tells Primrose that she must return home to Noblecourt in order to find the truth.

Upon arriving at Noblecourt, Primrose notices that crime has become more frequent since the fall of her house. She is reunited with Revello, a man who used to work for the city watch, and Simeon, a writer, and former gardener for House Azelhart who captivated her as a child.

Revello leads Primrose into the Obsidian Manse in pursuit of the right-hand man, and they soon realize that he is none other than Albus, a captain of the city watch thought to have died. Enraged by his betrayal, Primrose exacts her revenge on him as well.

Simeon suddenly appears in the room and stabs Primrose, revealing himself as the head of the crows and the one who killed Geoffrey Azelhart. Primrose collapses and is rescued by Revello to recover at his home.

After her wounds have healed, Primrose makes for Everhold, Simeon's home. Simeon prepares a play that is a mockery of her life in an attempt to distract her from her goal. She persists and confronts him at the amphitheatre balcony, where he attempts to further dissuade her. Overcoming his words, Primrose finishes her quest for revenge.

Primrose finally returns to Noblecourt and visits her father's grave. While her journey has ended, her heart still aches with hollow pain. She does not yet know what she will do with her life, but until then, she will dance.

The employer of Primrose and an acquaintance of one of the men who murdered Primrose's parents, he was the one who gave her a roof over her head while she searched for the whereabouts of the 'crows'. Many times, it is referenced how Helgenish is an abusive person who takes advantage of his dancers, threatening them and forcing them to earn their keep while using them to satisfy his own twisted pleasures. When his dancers have no use to him anymore, Helgenish 'puts them down' by beating them half to death and throwing them into the gutter.

Helgenish constantly abuses Primrose as much as he dotes on her. He manipulates her into staying as his and his alone, showing how materialistic he is towards things that have caught his fancy. Primrose has strong feelings of hatred towards him for disgracing her constantly through her life. She states that her accomplishments are by her doing alone and that Helgenish never helped her in the first place—all of this gushing out the moment Helgenish murders Yusufa, her only friend. After facing him in battle, Primrose takes his life in exchange for his wrongdoings and steals the map Rufus had given him, finally setting her journey of vengeance in motion.

Yusufa was the only friend Primrose had while she worked under Helgenish. Primrose always defended Yusufa when the other dancers picked on her. As she was sold at a young age and had been mistreated for so long, Primrose had been the one to bring her happiness despite the abuse of their employer. While Yusufa did not know much of Primrose's background, the fact that she was kind enough to stay at her side was enough reason for Yusufa to help her in chasing down the man with the mark of the crow. Yusufa offers to distract Helgenish while Primrose makes her escape.

During her last moments with Primrose, she mentions her upbringing and how she wanted to be friends with the other, as she was the one who made he depressing life a bit better. She dies happily knowing that Primrose saw her as a friend. Upon Helgenish's death at the hands of Primrose, she sets off with Geoffrey and Yusufa living on through her own life. She still keeps the handkerchief Yusufa gave her through her travels.

Primrose is the main status enhancer among the eight as she has access to various buffing skills with her primary Dancer job, but the downside is that they only target one ally at a time. Primrose, like Ophilia, can request the assistance of townspeople she has allured. These guests will attack for a few turns and even protect her from direct hits. She can equip only daggers as her main weapon but makes up for the lack of versatility through her Dancer skills. She has high speed and evasion when compared to the rest of the travelers. Her speed allows her to act before her allies in order to provide buffs, and her evasion makes up for her physical frailty.

Once advanced jobs become available, Primrose is a strong candidate for the Sorcerer job. Even more than the Scholar, Primrose can combine her native buffing abilities with powerful offensive magic, and her naturally high speed makes it easier for her to break the enemy before they can damage her.

*Buffs that usually target one ally will also affect all allies.

Below are the sprites and appearance changes for Primrose with each basic Subjob:

"And so I must pursue the foul crow. Don't get involved. This is my problem, not yours. ...

But... I suppose you're free to do as you please. Come on already, if you're coming." —Joined the Party

"Call me if you need me. I am ever ready to take the stage." —Tavern Dialogue

"Faith shall be my shield." —Primrose's Catchphrase 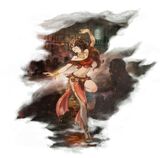 Cover artwork for the Octopath Traveler Original Soundtrack.
Add a photo to this gallery

Promotional artwork celebrating the Steam release of Octopath Traveler.
Add a photo to this gallery 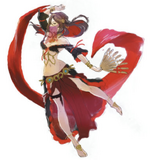 An early design for Primrose.

Concept art of Primrose.
Add a photo to this gallery

Retrieved from "https://octopathtraveler.fandom.com/wiki/Primrose_Azelhart?oldid=13365"
Community content is available under CC-BY-SA unless otherwise noted.