"To what end do I swing my blade?" — Olberic, when selected from the main screen.

Olberic Eisenberg is one of eight playable characters in Octopath Traveler. He was also one of the two playable characters in the Project Octopath Traveler Demo, the other being Primrose. A knight from a lost kingdom, Olberic became a sellsword and temporarily resided in Cobbleston. After a chance meeting with a colleague of his previous brother-in-arms, he decides to set out to find the answers he seeks— one of them as to why he swings his blade.

Olberic is a bulky and strong man, being the tallest of all the travelers. He has black hair that is hanging loosely back with white streaks. A strand of his hair is left unfixed. Olberic has a scar that goes from his left head side to his forehead. He's usually seen wearing a blue tunic with metal shoulder guards and a metal bracer on both hands along with leather sleeves, pants, and shoes. His sword is strapped to his left hip.

Prior to the fall of his country, Olberic was a knight who dedicated his life to the safety of his liege and kingdom. After the fall of his country, he had lost his purpose as a knight and constantly questioned what his reason for living was. Gaston, the boss of the brigands he had encountered in his starting chapter, described how his eyes looked dead and only lit up like flames upon mention of Erhardt.

However, even if he has forgotten his reason for fighting, he still dedicates himself to protecting those he cares about till the bitter end. This ends up being the answer Olberic has been seeking for so long.

As a knight, Olberic is honorable and has a strong sense of justice, feeling the need to protect those around him. His experiences and his knowledge provide him with much wisdom of the battlefield. Olberic is stoic, but shows a softer side from time to time. He always keeps his calm, no matter how dire the situation.

Olberic is a man of few words, even when interacting with his fellow travelers. He does, however, bestow his knowledge when needed, and has a strong sense of protection of them, ready to lend his strength to help. Tressa describes Olberic as "steadfast and calm", while Primrose admires his sense of justice and thrives for self-improvement because of him. Because of his former title as a knight of Hornburg, some of his companions often address him respectfully, such as Tressa and Ophilia calling him "Sir Olberic", while Alfyn calls him "your lordship".

"Your name is Olberic, and you are a warrior. You were once a brave knight, until you lost king and kingdom in a bloody coup. Today, you serve as a master-of-arms for a small mountain village. "To what end do I swing my blade?" The question tortured you night after restless night. Then, one day, you hear a name from your past, giving you new purpose..." — Olberic's description when selecting him.

Before moving to Cobbleston, he was known throughout the land as the "Unbending Blade" due to the sheer power with which he handled his sword. Olberic served under the king of Hornburg with his close friend, Erhardt, before losing both land and master to a war. Not only that, he discovered Erhardt to be a traitor, slaying their liege in front of him before besting him in battle.

After losing his country in the war, he moved to a secluded village and hides under the alias 'Berg,' allowing people to think that the mighty Olberic Eisenberg died along with his country. He acts as the town's combat instructor, aiding the townsfolk in protecting their home from brigands. Olberic stayed at Cobbleston for about eight years before the events that stir his resolve once more.

On what starts as a typical day in Cobbleston, Philip is kidnapped by a group of bandits. Olberic tracks them down in their hideout and battles their leader, Gaston. Upon realizing Gaston's sword was the one once held by Erhardt, Olberic springs to life, demanding to be told where he is. After being defeated by Olberic, Gaston states that Gustav, another man who knew Erhardt, may know of his whereabouts.

Olberic travels to Victors Hollow in search of Gustav, hoping to enter the tournament to gain a chance to speak with him. He is spotted by Cecily and Ned, who offer him a place in the tournament if he fights under Cecily's colors. He agrees, and after defeating a previous tournament champion, Victorino, he earns participation in the tournament.

Olberic bests Joshua Frostblade and Archibold in the tournament, reaching the final match against Gustav. Upon his defeat, Gustav agrees to speak with Olberic about Erhardt. He reveals that Erhardt possessed a strong hatred for King Alfred, and currently resides in Wellspring.

After speaking with the townspeople in Wellspring, Olberic learns that Erhardt was viewed as a local hero for slaying Lizardmen. He is welcomed by the captain of the guardsmen, Bale, after he reveals that he and Erhardt were once friends.

He later helps the guards defend against an abrupt attack from the Lizardmen, and ventures into their den in order to meet Erhardt. Olberic and Erhardt help slay the leaders of the horde before speaking with each other for the first time in years. The two reconcile after a duel, and Erhardt explains that he had worked for Werner, who resides in Riverford.

In Riverford, Olberic learns that Werner had overthrown the previous lord and rules the town with an iron grip. He meets with the leader of a resistance force, Harald, who plans an assault on Werner through a hidden path. As the attack is conducted, however, Werner intercepts the resistance, having foreseen Harald's plot. As Olberic struggles to defend the townspeople on his own, Erhardt appears and helps fight off Werner's men while Olberic pursues the lord himself.

Olberic defeats Werner in battle; however, before he has a chance to deal the finishing blow, Werner takes his own life. Before dying, Werner reveals that he destroyed Hornburg because the Gate of Finis was located there.

With the successful uprising in Riverford, Olberic returns to Cobbleston as he had promised the townspeople, having found the reason for which he wields his sword—to protect those who needed him.

Olberic, during his time in Hornburg, worked alongside Erhardt. He saw Erhardt as an equal and a brother, until the latter slew their liege. It was by Erhardt's hand that Olberic lost everything and began questioning the reason for which he swings his blade.

However, it is eventually revealed that Erhardt slew the king because he did nothing to save Erhardt's home. This caused Erhardt to harbor a heavy grudge against the king. With Werner pulling the strings, he ascended in the ranks as a knight with the sole purpose of one day having vengeance on him. In the end, despite having succeeded with his revenge plot, the hole in his heart did not mend. Like Olberic, he quickly wondered what his purpose for wielding a sword was any longer.

Their meeting in Wellspring allowed Olberic to understand Erhardt. Despite being honest with one another, however, Olberic finds that they could only resolve things through a duel. Though Olberic says that he can find no room in his heart to forgive Erhardt for his crimes, at the end of their duel, it is shown that they have mended their relationship as friends and even teamed up once more as the Twin Blades of Hornburg.

A boy that strives to become a knight just like Olberic, he is Olberic's protégé, living in Cobbleston with his mother. During the beginning of Olberic's story, Philip can be seen watching him teach fighting lessons to the town guards. Before long he is kidnapped by bandits that attack the town, forcing Olberic to give chase and come sword to sword with Gaston, an affiliate of Erhardt who wields his sword.

Once Olberic decides to leave the town, Philip asks him to make a promise to return and swears he will one day grow up to be a strong knight like his teacher.

Olberic's Talent is Bolster Defense. It allows him to Boost the Defend command, which will then increase damage reduction to himself as well as effectively Cover his allies. While this may initially sound underwhelming, it has tremendous potential in tough battles. A fully boosted Defend will be able to soak up an otherwise lethal hit against Olberic or a more fragile party member, ideal for when an enemy readies a powerful single-target attack.

One obvious advanced choice for Olberic is Warmaster. This will give Olberic access to all weapon types and boosts his offensive and defensive capabilities, especially with the Physical Prowess passive skill. With high-power weapons and Winnehild's Battle Cry, Olberic becomes an offensive machine capable of tearing through shields, though he may not support the party quite as well as H'aanit. A good, safe Warmaster setup for Olberic is BP Eater, Surpassing Power, Physical Prowess, and Saving Grace, though Saving Grace and Physical Prowess could be substituted for Hang Tough and Fortitude. In this setup, Olberic would be given Lion Dance for huge damage output between 1-25% health.

Another notable choice for Olberic is Runelord despite his magical disadvantages. Tressa is the better option for the class because she can use Transfer Rune better with Rest and Sidestep, Olberic can use the skill to give party wide Abide and Stout Wall as a very convenient buff.

Below are the sprites and appearance changes for Olberic with each Subjob:

"And so I must go and save the boy from those ruffians. What's that you say ? You wish to lend me your aid? Hm... You seems like you could hold your own on the battlefield. It would be my honor to call you a comrade. Phillip has been taken to the brigand's den north of the village. We must make haste." —Joined the Party

"My blade is unbending!" —Max Boost

"With each battle you might grow stronger." —After battle 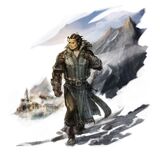 Artwork of Olberic and Primrose for Octopath Traveler: The Four Paths of Eight Travelers.

Artwork for Olberic when finishing Chapter 4.

Olberic's name could be derived from the name Olbert, that means 'famous for his inheritance' in Frisian and German. His last name, Eisenberg, is a German name meaning 'iron mountain or hill'.