Octopath Traveler: Champions of the Continent

This article contains information about content that was recently announced.

These translations are unofficial.

The game takes place in Orsterra, before the events of Octopath Traveler.

The protagonist is a "Chosen One" and will confront three champions possessing wealth, power, and fame. 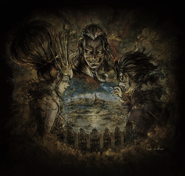 Retrieved from "https://octopathtraveler.fandom.com/wiki/Octopath_Traveler:_Champions_of_the_Continent?oldid=17678"
Community content is available under CC-BY-SA unless otherwise noted.