Edit
watch 02:30
Dead Cells Final DLC - The Loop
Do you like this video?
Play Sound

Akimoto, Yousuke
Heathcote is a character in Octopath Traveler. He is a butler serving Cordelia Ravus and is the boss in Chapter 1 of Therion’s story.

Heathcote is an elderly butler wearing a brown suit complete with brown trousers and a white undershirt and socks. He has white hair tied in a ponytail.

Heathcote is a thief-turned-butler, very cunning and shockingly knowledgeable about the underground, knowing about the black market which Therion notes "You have to be a part of it to know about it".

Heathcote is a butler who serves the Ravus family at Ravus Manor in Bolderfall. He was formerly an incredibly skilled thief and rival to Nighteye, but changed his profession after being caught in Ravus Manor and offered a deal in exchange for not being turned in.

10 years prior to the events of Octopath Traveler, the treasures of Ravus Manor, the Dragonstones, are stolen to be used as the keys to The Gate of Finis. Heathcote himself was able to recover the sapphire one.

In order to retrieve the rest, he and Cordelia, the lady of Ravus Manor, together come up a plan to lure and blackmail a thief into recovering them by using the dragonstone as bait in the manor and asks the local barkeep to spread rumors about it, but was often met with disappointment due to all of them being caught or unable to get past the manor's defenses.

One day, he came across Therion in the room where the dragonstone was kept and engages him in battle. Despite being overwhelmed by the younger thief, Heathcote was able to discreetly place a Fool’s Bangle, an accessory considered shameful to thieves, on his arm. Together with Cordelia, Heathcote would bargain with him that he would remove the band if he recovered the remaining three Dragonstones, which Therion grudgingly accepted, to their delight.

Heathcote would assist Therion during his search by providing him with information on the stones' whereabouts and would personally come to his aid in Northreach when Therion was cornered by members of Darius's gang. There, he told Therion about his past before wishing him luck on getting the remaining dragonstones back from Darius.

After Therion completes his mission, Heathcote would accompany him back to Bolderfall to give the remaining stones back to Cordelia, and reveals to her that he had already undid the lock on the bangle at her earlier suggestion after she asks him to remove it, to her surprise.

Therion is the thief who falls for Heathcote's deception. When Lady Ravus attempts to befriend Therion, Heathcote notes that "He [Therion] wouldn't be able to stand compassion from the ones who deceived him."

Heathcote serves her. He also is the one who recommend that the lady does not attempt to befriend the thief.

Heathcote will begin battle with a Ravus Guard at his side. He will periodically summon more if you defeat them, but it will appear with 50% health and 1 less shields.

Falcon Saber
Heathcote is a townsperson in Octopath Traveler.

"A treasure's true value is known only by its rightful owner. Thieves simply take without ever considering that." —Speaking to Heathcote

"Are you in need of some help? I would be happy to assist you if necessary." —Guide

"Please allow me to take my leave." —Part Ways 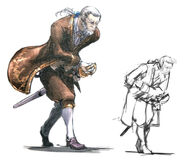