"A world of knowledge awaits."

— Cyrus, when selected from the main screen.

Cyrus Albright is one of eight playable characters in Octopath Traveler. He is a professor at the Royal Academy located in Atlasdam, found in the Flatlands. Cyrus is known for caring greatly about knowledge and his passion for teaching.

Cyrus has long black hair tied into a ponytail. His hair is combed back, with two locks of his hair framing both sides of his face. Cyrus wears a white button-up shirt with puffed sleeves tied at the wrist, along with a cravat. He also wears a black hooded coat with a caplet, accented with gold filigree and held together by a black gemstone. He also wears a brown vest with filigree embroidery over his white shirt, black breeches with black socks, and black leather shoes with golden buckles. In his sprites, the inside of his coat is a dark purple. Primrose states that Cyrus has "a face that girls are like to fancy".

As a scholar, Cyrus puts knowledge before everything else. He believes that knowledge is something that must be shared with other people, in contrast with the belief of Headmaster Yvon that knowledge is an extension of one's personal power and should be obtained only for oneself. Though it is blatant that Cyrus opposes his beliefs, he keeps quiet only because saying anything might cost him his job as a scholar. He is always eloquent and respectful towards others, happy to share his knowledge whenever possible.

Cyrus, with his overflowing knowledge, has excellent deduction skills. He is also rather pragmatic, taking advantage of the sabbatical to search for the missing tome, From the Far Reaches of Hell. Though, despite his intelligence, he is rather oblivious to the feelings of women who fall for him. He even mistakes the actions of envy made by his enamored student, Therese, as feelings of isolation and lack of attentiveness from her tutor. Cyrus even goes so far as to say it is his fault for not providing enough time for Therese in terms of her studying, proving that he cares for the wellbeing of his students. Ironically, Cyrus is anything but oblivious to the feelings of women for other men, which unnerves Primrose when she meets Simeon for the first time in ten years and Cyrus is quick to notice the way she looks at him.

Cyrus often provides academic knowledge when talking with his fellow travelers, with mixed results. While Ophilia and Alfyn rejoice on his vast wisdom, others, such as Therion and Tressa, find it boring. Nevertheless, Cyrus always shows concern to his companions' problems, and try to give advices whenever possible to ease their minds. His analytical mind and thirst for knowledge also has him showing interest for the other travelers' own wisdom as well.

"Your name is Cyrus, and you are a scholar. You teach at the Royal Academy in Atlasdam, and though you have numerous admirers, your only true passion is the pursuit of knowledge. "There is so much more I would learn!" One day, you realize that an invaluable tome has vanished from the Royal Library, piquing your insatiable curiosity..."

— Cyrus' description when selecting him.

Cyrus is a professor to Therese and Princess Mary at the Royal Academy in Atlasdam. He is disapproved of by Headmaster Yvon for his willingness to share the knowledge contained in the tomes of the Royal Archive. While attempting to read a book in the Archive, he discovers it is missing. Choosing to investigate, Cyrus discovers that a colleague of his, Russell, has been stealing and selling valuable tomes in order to pay off his debts. He then learns that there is still one book missing that vanished before Russell's thievery began. In the wake of a troubling rumor, Cyrus leaves the Academy in pursuit of the tome that vanished from the archives some 15 years ago, From the Far Reaches of Hell.

Cyrus arrives in Quarrycrest to seek the help of an old friend, Odette. She asks him to investigate incidents of missing persons, which leads to his discovery that a kidnapper was abducting victims near the inn. He enters the sewers in pursuit of the kidnapper before stumbling upon a room where human sacrifices were being used in rituals to create blood-crystals. Gideon, the kidnapper responsible for the rituals, confronts Cyrus, but is defeated.

Cyrus rescues the surviving prisoners and obtains a translated copy of From the Far Reaches of Hell from Gideon. Upon some inspection alongside Odette, they trace the production of the book back to Stonegard.

In Stonegard, Cyrus learns that the tome had been translated by Dominic, who refuses to let Cyrus enter his home. Cyrus later discovers that Dominic translated the tome so he could purchase medicine for his daughter, but she passed away. The translation was commissioned by Yvon.

Cyrus soon notices he is being followed by Lucia. She lies that she also had suspicions of Yvon and offers to take him to his birthplace to investigate further. As he enters the building, she renders him unconscious and throws him into a dungeon, where he is taunted by Yvon.

Therese, who had also followed Cyrus, arrives to rescue him, but is soon taken hostage by Yvon. Cyrus pursues and confronts Yvon, who uses a blood-crystal to gain supernatural powers, but he is defeated nonetheless. While recovering, Therese tells Cyrus that Yvon had intended on going to Duskbarrow.

Cyrus spots Lucia entering the Ruins of Eld in Duskbarrow and follows her. There, he discovers an ancient mural and a collection of tomes thought to be lost from the world. When he confronts Lucia, she asks him to join her in her research, but he refuses. She uses what she calls a "perfect blood-crystal" and tries to kill Cyrus, but is defeated.

Upon further inspection of the ruins and tomes, he concludes that the mural had been left as a warning of a destructive force that lay in wait should humanity be tempted by the secrets of life and death. He resolves to further study this information and use the knowledge for the better of mankind.

She is a student of Cyrus and the one who spread the false rumor about his illicit relationship with Princess Mary of Atlasdam. It is noted that she has strong romantic feelings for her professor, which is the reason she attempted to strain the relationship between him and the princess. Despite her best attempts to show her feelings to him, Cyrus is oblivious and assumes that her actions are due to his negligence as her mentor for always paying more attention to Princess Mary's questions.

The princess of Atlasdam and one of Cyrus's students, Mary is incredibly studious and has high expectations for herself, always eager to ask the professor questions. Due to the scholar's tendencies to overshare when it comes to his knowledge about certain things, their conversations tend to drag on.

A close colleague of Cyrus, Odette left the academy 10 years ago and moved to Quarrycrest. Odette always teased Cyrus for always catching the hearts of woman without even trying, scolding him to be more alert of such feelings. Despite the remarks she has made towards the scholar, Odette cares deeply for Cyrus, always warning him and wishing him the best. She willingly helps him in his search for the missing tome.

Cyrus is a Scholar, and thus has several spells that can target the magical weaknesses of enemies on a large scale. He can initially only equip staves and has very poor physical damage output, but more than makes up for it with his three elemental damage types and outstanding elemental attack. Although he is physically vulnerable with low health, physical defense and evasion, he has high elemental defense and can weather magical attacks.

Cyrus' Talent is Study Foe, which reveals one weakness for each enemy at the start of battle. His native job's Analyze is a learned ability, and so this talent is useful for discovering weaknesses from missable early game foes, especially if Cyrus is chosen as the protagonist.

Once the player has access to the secret jobs late into the game, changing him to the Sorcerer class provides him with a massive boost in his elemental attack and defense. The Sorcerer class grants him access to all elements, as well as bows. His physical damage output will still be poor, but grants him access to the Primeval Bow of Storms, which augments his wind attacks. The main drawback of this combination is that it makes Cyrus's Scholar skills (with the exceptions of Analyze and Alephan's Enlightenment) redundant.

Cyrus also makes a fantastic Starseer, which allows greater elemental diversity among the party. As a Starseer, Cyrus can deal huge damage with Shooting Stars, which also grants him access to the elements not found in the Scholar class. Classing him to Starseer also allows another magically inclined character, such as Primrose or Ophilia to have full elemental access as a Sorcerer. As the Starseer cannot equip staves natively, Cyrus is one of only two characters, the other being Ophilia who can power up all three hits of Shooting Stars.

Additionally, Cyrus' high elemental attack allows him to be an effective Runelord, capable of performing potent rune follow-ups and devastating Balogar's Blade attacks, augmented by up to 4 elemental upgrades with the Absolute Zero/Bishop's Staff, Harald's Sword and the Battle-Tested Axe. Also, no matter what magical job he uses in the end, the Elemental Edge support skill learned from the Runelord job will be very useful.

Below are the sprites and appearance changes for Cyrus with each Subjobs:

Battle (Champions of the Continent)[]

Same like in Octopath Traveler, Cyrus is a Traveler with mage class, has several powerful spells that can target the elemental weaknesses of enemies on a large scale. He now uses a Tome as his physical weapon, though his physical damage output is poor. Like any typical mage, he is physically fragile and could be killed quickly if the player is not careful. However, he makes up for this through high elemental defense and thus acts as a good magical wall for his allies.

"And so I have taken it upon myself to investigate this suspicious scholar. Interested in coming along, are you? It seems you have quite the curious streak yourself. But of course mysteries exist only to be solved. After all, it is of utmost importance to remember that. Ah, but here I go again! Don't let me talk your ear off— But I will be glad for your help. Let's get right to business. No doubt we'll find Russell his laboratory down below." —Joined the Party

"My focus is unparalleled!" —Max Boost

"Thus ends your lesson." —After battle

"Not bad, a passing grade." —After battle

"You should've studied harder." —After battle 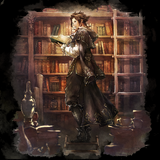 Official artwork of Cyrus in Champions of the Continent.

Artwork of Cyrus and Tressa for Octopath Traveler: The Four Paths of Eight Travelers.

Cyrus as a Dancer.

Cyrus as a Warrior.

Cyrus as a Thief.

Cyrus is a Persian name that means 'sun' or 'throne'. His surname, Albright, could be from 'all bright'.