Edit
watch 02:56
Raise a Floppa - The Loop
Do you like this video?
Play Sound

— Blotted Viper, before battle against Alfyn.

Blotted Viper is an enemy in Octopath Traveler. It is the first boss fought in Alfyn's tale. It is a large poisonous snake which resides in the Cave of Rhiyo, a small, snake-infested cave east of Clearbrook.

During the events of Octopath Traveler, Nina and Lily went to the cave to pick waterblooms for Zeph. While they were there, Nina was bitten and poisoned by a Blotted Viper. Zeph could make the antidote for the poison but he required Alfyn to obtain a sample of the venom to do so. It is unknown whether the Blotted Viper fought by Alfyn is the same snake as the one which attacked Nina. 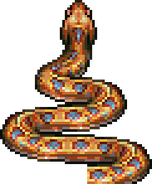 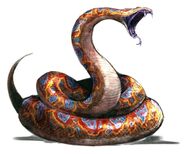 Concept art of the Blotted Viper.